The Painful Price to Pay for Constant Urgency 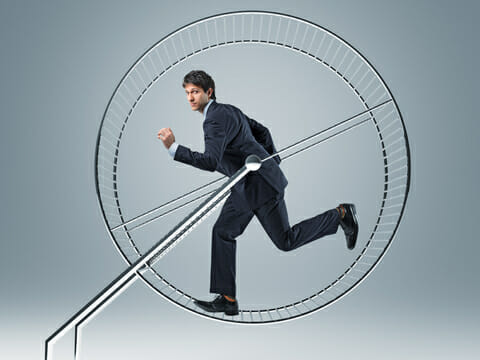 When you’re asked, “How’s your week going?”, is your gut response to say:

If so, you’re not alone.Crazy Busy – constant urgency – has become the new normal.Only there’s one problem.  If everything is urgent, then nothing is urgent.There are things in life that demand urgency.  A heart attack. A house on fire. A war.Yet, too many people I work are feeling overwhelmed.  They’re not cardiac surgeons, or first-responders, or front line infantry, but they complain that work has become all urgent, all the time.In the rush to get more done in less time, going fast may be exactly the wrong thing to do.  The idea that haste makes waste has been around for centuries.  In fact, this idea first made it to print in the book of Wisdom, over two thousand years ago:

There is one that toils and labors, and makes haste, and is so much the more behind.

This wisdom of the past has been scientifically proven in the present by neuroscience.  It’s been shown that when people are in a activated state (rushed and busy), the brain’s locus of control moves from the neo-cortex to the limbic system and the reptilian brain.   In other words, when you rush, you don’t have the cognitive capacity to make good decisions. Your circuits get overloaded.Operating in this state creates serious repercussions in the workplace.  Consider these five prices you pay for living in perpetual urgency:

The key to much of an organization’s success comes from the ability of its members to collaborate effectively.  Building trust won’t come in an instant on demand.  It takes time and intention to build genuine relationships.  When people are rushed and scurry from one task and meeting to the next, it gets easier to see others only for their titles and functions.   Real dialogue gets dumped for turf-war debates, and information gets filtered through a lens of “What would this mean to me?”   This results in people resisting progress and change.

When someone’s in a rush to get things done, differences of opinion are a drag…literally.  Taking time to listen and learn an alternate perspective takes time.  If your primary modus operandi is “we’ve got to decide and go”, you’ll tend towards being a steamroller in the name of “a bias towards action”.

Being busy and urgent isn’t just personal.  Do it enough, and it becomes the cultural norm of “how we do things around here.”Karen, a relatively new CEO of a regional bank, shared this example:

One of the first things I noticed around here is that our people don’t feel empowered to speak up.  When I first came on board, I sat down with the executive team (my direct reports), and asked them to show me project plans for their top priorities.  As they reviewed their plans, they shared the plan deadlines with me.  I asked them “How did you choose these dates for these projects?”  They said, “We tell the teams when things are due.”  I asked them “Did you get any input from the teams on the deadlines?  Did you think to ask the people doing the work when they could get things done?”  There was a long silence.  “No.  That’s how we’ve always set deadlines.  No one ever pushes back on the deadlines.”

Kathy than discovered that many of the project deadlines are routinely missed, because they’re often completely unrealistic.

In meeting rooms around the world at this very moment. there are people huddled together, trying to figure out how to increased sales.Jamie, a marketing manager, shared this example:

One of our most successful brands was losing sales over a couple of months.   At first take, we couldn’t figure out why.  A few people on the team just wanted to cut the price, in hopes that sales would increase.But we held out and did some more sleuthing.  It turned out we had a distribution problem for some of the brand’s products. Once we found the cause we were able to find a new distributor in that market.Had we cut prices, we just would have cut into our margins.

As you already know, constant urgency creates stress.  The stress impacts our physical and emotional health.  Leaders pay an extra price: not only you’re your own health suffer, but your personal stress negatively impacts the people you lead.  Emotions are contagious, and the emotions of leaders are the most contagious of all.Clearly, we pay a price for all of this urgency.  So what can you do about it?Five Ways To Address Unsightly Urgency1 .Take time to build real relationships.Nothing gets done without people doing it.  In some cultures around the world, “Putting relationship before task” isn’t just a nice to have; it’s how business operates.  People will do more (and do better work) for people they know, like and trust.  There’s no shortcut to building a relationship. It’s an investment that pays dividends.

You already know what you think.  What you don’t know is what others think.  Rather than see everyone and everything as a series of boxes to check off of your to do list, use inquiry to gain insight.  Ask open ended questions.  Let them talk.  Probe deeper.  Follow up.

People are more committed to things they feel ownership of. If you unilaterally decide things and tell people “this is how it’s going to be”, you are perpetuating a parent/child dynamic.  Adults want to be treated with respect. Giving them a voice, while it might take a little more time upfront, will save you time down the road.

One of my colleagues, Lisa Bodell, calls thinking “a dangerous act”.  To understand how systems operate, you need the space and time to think critically and holistically.  When  you have thinking time, you can focus on those higher level strategic decisions that inform everything else you do.5  Find regular forms of renewal.In our hyper-connected 24/7 world, it’s easy to try to stay always on.  You can work wherever and whenever.  However, don’t confuse quantity with quality.  By giving yourself adequate renewal, you see spot false urgency when it arises, and find alternate ways to cope with it.How else do you deal with urgency?  Join the conversation by leaving a comment below.

When you sign up, you’ll automatically receive a free copy of Alain’s ebook Navigating Trust.